Anyone here have any experience or thoughts on a tenor guitar?

I’ve reading up, 4 strings, tuned in 5ths, small/easy to transport/carry, suitable for melody playing with some chord note accompaniment.

I play a lot of traditional/folk Scottish music and am thinking it might be a nice option to try.

Anyone here have any experience or thoughts on a tenor guitar?

I’d not even heard of it! Interesting idea. Banjo tuning on a guitar body?

small/easy to transport/carry, suitable for melody playing with some chord note accompaniment.

I have to say that description put me in mind of my Yamaha GL1 guitalele, which I love.

6 strings in guitar style tuning (which I adapt to P4 intervals) on a ukelele size body. The low string is usually tuned to A, so it’s like playing a guitar capoed at the 5th fret.

For some reason I tried to tuning mine a whole tone lower, i.e. G C F Bb Eb Ab, & liked it, so it stayed that way. Using standard strings the intonation isn’t perfect when tuned like that, but I don’t tend to go far enough along the neck for that to become apparent. I believe that some people select special string sets for other tunings, even ‘normal’ guitar tuning (i.e. low string tuned to E)?

The small size is a bit awkward & takes some getting used to. It’s a compromise thing. The size, & other factors, allow it to be taken places you might not take a full sized guitar or your ‘best’ guitar, and you can’t have everything. I added a couple of strap buttons (it doesn’t have any as standard) after watching a youtube ‘how to’, so I can now support it with a proper strap. That helped.

Being small also means it can live right by my workstation, so I can just pick it up pretty much any time I have a few spare moments.

Here in the UK it cost just 80 GPB including carriage, & came with a neat gig bag. I love the tone. Actually I prefer its tone to that of my Yamaha NTX1 which cost 4 times as much!

Edit to add: Don’t be misled by the size & price. It’s not a ‘toy’. It’s a properly made Yamaha musical instrument.

Thanks for your input @DavidW. I was interested in the guitalele a while back, I experimented with a uke, but didn’t like the odd tuning (with bottom string not being the lowest) and so looked at other tunings and bigger sizes (concert? tenor? baritone), I liked the four strings, which I think steered me away from the guitalele.

I’ve been watching some vids, and even tried removing the lowest and highest strings on my guitar (!!) and tuning the remaining 4 to GDAD (same as the guy in the vids I’m watching). Really liking the ringing/drone type sound, it seems to suit the type if music I like to play.

How are you getting on with the stick?

I’ve been watching some vids, and even tried removing the lowest and highest strings on my guitar (!!) and tuning the remaining 4 to GDAD (same as the guy in the vids I’m watching). Really liking the ringing/drone type sound, it seems to suit the type if music I like to play.

Is it too obvious to ask if you’ve considered DADGAD on your 6 string? I’ve never tried it, but I know it’s popular for certain applications and is apparently known by some as ‘Celtic tuning’.

How are you getting on with the stick?

It’s going to be a long, slow, (but I hope rewarding) process.

That does of course also involve me in 5ths tuning on the ‘bass’ side, but with reverse string order to what you’re considering (high to low, instead of low to high). At the moment the limit of my two hand playing is a single note (e.g. root) drone with the left hand (on the ‘reverse’ P5 side) behind a right hand melody (on the ‘normal’ P4 side) & even that is tough!

However I progress & I enjoy, so what more could I ask for.

Is it too obvious to ask if you’ve considered DADGAD on your 6 string? I’ve never tried it, but I know it’s popular for certain applications and is apparently known by some as ‘Celtic tuning’.

Yes, I considered it but I was looking for a physically smaller instrument to more easily transport, and was taken by the simplier 4 string approach. As I said, I’m enjoying the GDAD sound from by “cut down” guitar, so I’m going to try some out at the guitar shop I think.

However I progress & I enjoy, so what more could I ask for.

I was looking for a physically smaller instrument to more easily transport, and was taken by the simplier 4 string approach.

Interesting @mem. I imagine you’ve seen some of the things that Justin Johnson has done with 4 (& 3) string guitars, albeit that he’s mainly interested in Blues?
https://www.youtube.com/c/justinjohnsonlive/search?query=4-string 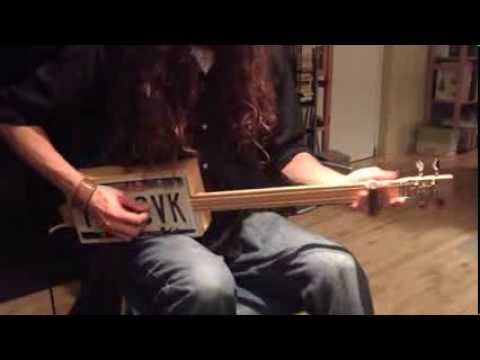 No, I haven’t seen these, interesting, although I prefer acoustic, the principle seems similar to the tenor guitar. I like his Blues playing, sounds great.

There does seem to be a lot of options out there, guess I’ll have to get my hands on a few and try them out.

Well I went to my local guitar/music shop to try some. They only had three to choose from, I guess tenor guitar is not a popular instrument!

My impressions, very narrow neck, strings seem closer together than my guitar (classical/nylon strings). The 3 I tried had different sized bodies, all had steel strings.

Having played around with GDAD on my guitar, I’m now trying ADGC. I was getting used the 4ths intervals, so thought I’d try it on 4 strings, and this seems a nice range.

I considered a baritone uke, but not keen on the higher range (DGBE) and the uke sound/timbre. I think a bigger body, like a travel size guitar but with 4 strings.

I am not sure what will work for me, still considering options🙂

. I think a bigger body, like a travel size guitar but with 4 strings.

@mem I’m interested to know how do you position the strings when you use just 4 strings on guitar ? Do you use the middle 4 slots on the nut, or bias the 4 to one side or other?

I’m also intrigued how you see the 4 string arrangement as advatageous over 6 strings, of which you mainly choose to use just 4? Maybe you want to be able to strum without fear of catching the ‘lesser used’ strings?

As an experiment, I removed the highest and lowest strings from my standard guitar, so I’m left with 4 in the middle of the fretboard. I thought this would be best to be able to try out different tunings, but also it leaves a middle range, not all high-end with just the top 4 strings, and not all bassy with the just the bottom 4. I also wanted to try GDAD, so this worked out ok.

The advantage of 4 strings is, yes you can stum very easily, and I find much easier to orientate with only 4 strings, especially with regular (all 4ths or all 5ths) tunings. GDAD is a bit trickier being irregular, but great for the type of tunes I play which are mainly in bagpipe scale (A mixolydian with a low G), and lots of key of D, G or A. You can get nice drone sounds from the open strings.

I’m also trying out tuning in 5ths, which matches fiddle tuning. This seems to fit nicely with the fiddle tunes.

In general, with 4 strings I find it easier to navigate, less strings to think about. Today I tried the Autumn Leaves progression, which was easier when I went back to 4ths tuning. I think the jazzy chords might be better in 4ths tuning.

I’ve a couple of lower priced Tenors online, but for now I’ll continue to experiment.

Fascinating @mem. Thanks for the extra detail.