Based on Jef Moine’s ABC Notation Extension Module [1] (in JavaScript) to implement Phil Nice’s MDNN [2] I have programmed a similar module - the IFR-Module within the abc2svg-family - to realize David Reed’s IFR approach to music. The first area shows the melody in conventional staff music notation, with the lead-sheet chords right under it.

The next area shows the same melody notes in the T-Line, this time in the tonal map of the given Major key, and marks them according to their appropraite octaves: unmarked for the basic register, a '-superscript for the next higher octave, a ,-subscript for the lower octave, and so on. The rhythmic values are also shown.

The H-Line lists the basic Harmony, ie the Chords spelled notated IFR-wise and spelled out as Triad or Tetrad.

My ABC-notation for Guitar Chords supports some additions eg
“CM7:#x1/G” leads to the C Maj7 chord with a #11 extension and with G in the bass.
However the spelling in the H-Line still shows the basic Triad or Tetrad only.

The ABC-script to render the song in a local browser is as follows: Is this approach worthwhile at all? Anyone interested in me making the module available to others?
In that case, any suggestions or hints for improvement are most welcome.

Welcome to the forum @slingaya

I have programmed a similar module

Oooo. Exciting. abcnotation is great. I’ve used StackEdit to do things like this:

My dream abc addon would be something that could produce an IFR melody contour like this (the original of which I hand coded in html & css, with the css mainly being used to ‘squash’ the line hight in the melody contour sections - the same could be done in a word processor). I prepared this while doing Jelske’s Introduction to Melodic Improvisation course. This is soooo cool. But…. Some of us are not so tech savvy. Any chance of getting some foolproof step by step instructions?

Some of us are not so tech savvy. Any chance of getting some foolproof step by step instructions?

The tutorial/guide that got me started was the one by Steve Mansfield: http://www.lesession.co.uk/abc/abc_notation.htm

To use abcnotation you need a ‘markdown editor’. That editor might be an application you download to & run on your computer, or it could be a thing you use in a browser. The ‘StackEdit’ I mentioned is an example of a browser based option: https://stackedit.io/ & is what I started with. I’ve also used ‘EasyABC’ on a Windows desktop. There’s a list of software at https://abcnotation.com/software.

Sorry that’s not a personal step by step guide as such, but I’m a user not an expert & other people who are experts have written such things already (see above). Markdown & abcnotation are almost inherently at least a bit techie, but I think you may find them well worth investigating if you have a need you think they might help fulfil?

I hope that helps.

Thank you David for that in depth reply. I will look into that and see how much effort it would be for me.

My approach so far has been to practice every few days with one of my fake books. I’ve got a bunch of fake books. I pick a song I’ve heard before and say … ok we’re in the key of F. Then I read the music saying… starts with a 5, up to 1 2 3 over the 1 chord, etc. since I’ve heard the song the melody should play in my head. I try to pick pieces in different keys. With a little practice like that, I can now see the tonal numbers in a few keys like C, F , G. I’m sure the rest are just a matter of time and diligence.

Hi @slingaya and welcome to the forum.

I was interested to read your work on ABC notation. I use ABC (and the EasyABC software) and currently I thought I could use it to generate some sound files which reproduce the SingThe Numbers tracks.

So, I have a list of number sequences, which I have noted down while listening to the tracks. Is there any way I can get from this numbers list to an ABC file?

I’ve decided to stick with my manual method, but I am going to switch over to GOODNOTES as a rendering tool on my iPad, and see if I can leave pencil and paperbehind

This is soooo cool. But…. Some of us are not so tech savvy. Any chance of getting some foolproof step by step instructions?

Re-reading, it occurs to me that I assumed you meant the abcnotation stuff, but it’s possible you meant the IFR melody contour example for “When I Fall In Love” that I posted? Preparing that had nothing to do with ABC, all it requires is some very careful (some might say tedious) editing of text - or the basic idea can be adapted & used in any wordprocessor that allows you to later line spacing. I think I may have written about that on LearningStone when I first did it?

FX: Time passes while I search.

In case it’s of interest I found this…

You can probably do most of what I did using WORD (or any other word processor). If you’d like to give that a go, try using this recipe:

a) Choose a non-proportional (i.e. fixed width) font, e.g. Courier. I find the fixed width makes it easier to line things up.
b) [optional] Set the option to show ‘spaces’ as feint dots (Tools menu > Options > View tab > Formatting marks?). I find that helps when setting out the numbers.
c) Type in the lyric line.
d) Above (or if you prefer, below) that type in the numbers over the appropriate words, giving each number ‘level’ its own line.

That should give a tonal sketch, but the numbers will occupy a lot of space, so…

e) Reduce the ‘Line Spacing’ on the numbers section, to give a more compact (& to me more ‘flowing’) look/feel.

I suspect that with WORD you may find (as I did with Libre Office) that you can’t reduce line spacing below 1 without odd things starting to happen (i.e. loosing bits of the numbers). That’s why I opted to use html, because with that I have the option to reduce the linespacing even further. Working in html is however less intuative as it typically means working in a text editor which is not ‘WYSISYG’ (if you recall what that means?).

I hope that makes sufficient sense. If not, please ask.

If you’d like to see the html version (so you can look at the source code & get a feel for what’s involved) we probably need to exchange by some other means, such as email since I can’t upload html here (a thing that seem like a very reasonable Forum restriction).

Ah. I recalled that we can use BBCode here, so I can at least post in a little bit of the ‘source’ for the html version of “When I Fall In Love”. Here’s what the first line loosk like as ‘raw’ html in a text editor. The <tonalsketch> & <lyrics> markup are things bits of configuration ‘magic’ that are defined elsewhere in the file & that don’t need changing for each song (I’m not sure why some bits are in different colours - that’s some sort of ‘Forum magic’!).

My goal is to create my own library of tunes in the IFR notation from the book, which shows melody and chords by bar. No lyrics. I’ll use this to play the tunes in all keys, and I hope start to remember better what different phrases sound like (I want to say, “aha, that’s a descending arpeggio from the 6th over the 4 chord, etc.”)

I’ve attached my first stab at creating these in GOODNOTES on my ipad (it’s an $8 app), instead of pencil and paper. It took a couple of hours to learn the basics of GOODNOTES, and I decided to use music paper as the background, only because it makes it easier for me to line up the little numbers.

If you saw my handwriting you’d immediately know why I want to use a simple graphics tool. But beyond that, I think using pencil/paper or a simple graphical tool will make you actually focus better on the tune as you construct the tonal trascription, as David Reed calls it. I expect with a little more practice, GOODNOTES will be just like pencil/paper to me. 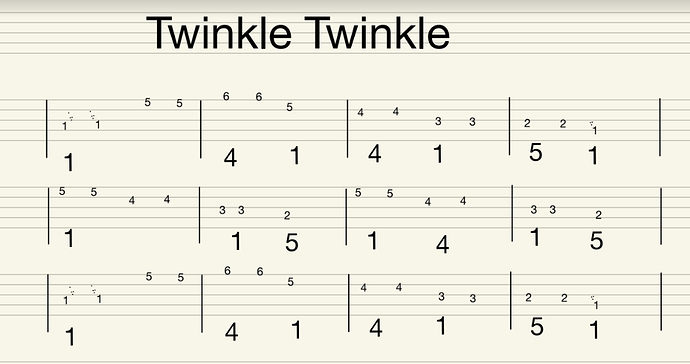 Great stuff! I tried doing that but my technical skills weren’t up to it. Instead, I have been trying to visualise standard notation melodies directly in IFR rather than writing down the numbers. It turns out to be fairly logical. So in the key of F with one flat, I see the C as 5 so all lines above and below are therefore the odd numbered scale notes. I’m not good at it yet but I have a feeling it will be more rewarding for me than trying to add IFR numbers physically to music notation. So it’s just sight reading IFR (instead of solfa) rather than adding it as an extra line of notation.