Leaning Chord Progressions - Summertime - This or this?

Just like we want to think/hear of melodies as numbers and learn them in with a fixed reference point that will be re-usable in general, same for chords yes?

But what about a song being considered as in either a major or minor key? 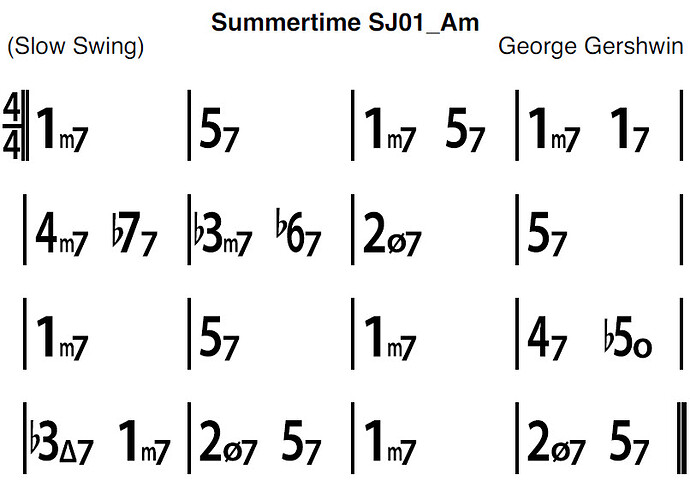 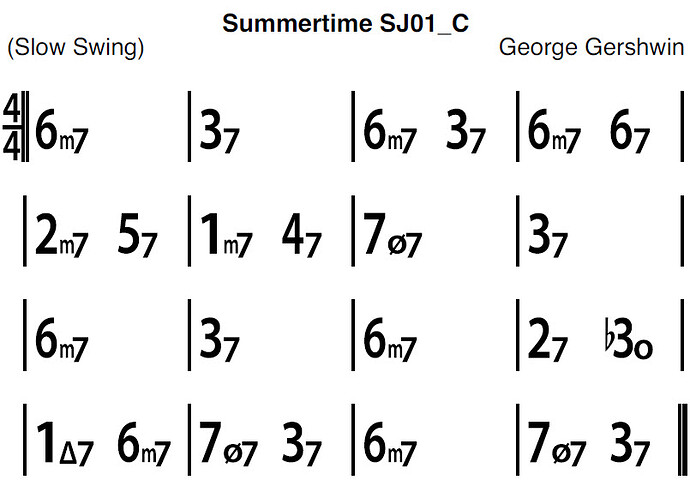 Ultimately I can imagine a synthesis whereby one would consider these equivalent (which they are) and each equally easy to think of or mentally switch between.

I can also imagine that learning things two ways might lead to more confusion than clarity (at least at first), and create stumbling blocks to the fastest possible progress.

I’m interested in people’s opinions (both IFR and others) as to what they think is the easier and faster way to learn this progression and others like it, and how one ultimately comes to think of “major” and “minor” as tonal concepts that apply to progressions and songs.

I’d think of it in the second way! I think if you want to improvise in an artificial way (just muscle memory a bunch of licks and regurgitate them robotically) then the first is better because “1” is always home and that just feels more natural. But if you want to improvise in a way that connects to your ear I think the second is better. Although it’s weird to think of “6” as home (as it takes time to get used to), it’s definitely an advantage to see both minor and major as one big picture. Also especially if I’m listening to top 40 at a store or something. When I hear chord progressions involving chords 1 5 4 6, my ear flops a lot between major and minor tonality, sometimes I can hear them both simultaneously. But it’s easy to navigate with the IFR way, but would be a nightmare to think of maj/min as two separate things.

I’d think of it in the second way!

I’m with @Racha . It was written in a minor key, so the natural way to lok at the tune if you ‘believe’ in the IFR approach is to see it as being in the 6th harmonic environment, i.e. with “6” as home. If you use the various IFR exercises, “6” is just as valid a home as any other - though some may appeal to you more than others!

Hi,
I really like the second approach, it makes it so much easier to undertand the changes. It also highlights the unusual changes one may not be familiar with!

Thanks to @sj1 for the great question and also to everyone else for their thoughtful replies. I love the atmosphere of friendship and respect in this forum! The only clarification I should add in terms of the IFR method itself is that IFR has no preference for either form of analysis. As I often say, all harmonic analysis is subjective. I know it doesn’t always feel subjective, because some songs are so simple that it seems like there is only one rational way to analyze them. But even that is an illusion. Any song in the world can be analyzed in any key you like.

For example, you’ve already hit on two of the most useful and illuminating metaphors for analyzing Summertime. That opening chord can be called 6-, which causes many other chords of the song to appear as old familiar friends (e.g. the 1 chord, the 2- chord, etc.). Or we could call that opening chord 1-. This requires us to deal with the somewhat more complex idea of a “minor scale”, but it does give us the nice benefit that our tonal center is called “note 1”, which seems like a sane way to refer to our tonal center.

But none of this is right or wrong. You could also call that opening chord #4-. The rest of your harmonic analysis would become a train wreck full of obtuse and unfamiliar chords. But it wouldn’t be “wrong”. It would just be unhelpful and unnecessarily complicated.

So in terms of IFR, it’s not that the 6- chord concept is “better” than the 1- chord concept. It’s not a question of better. It’s a question of which model to learn FIRST. Because almost every song in the world makes use of multiple chords from the same major scale, the single most empowering thing we can do for ourselves as beginning improvisers is to learn to see these references to the major scale in the music all around us. But music is a creative art form, and so abstraction is the rule rather than the exception. This means that no matter how enthusiastically you embrace the 6- concept that IFR seems to prefer, composers will always come along to frustrate your attempts to understand their works of art with just that concept.

So there are two dynamics to understand here. One is the teaching dynamic. Here, we have no preference between 1- and 6-. Both concepts are important and we eventually want to master both. But we do have a clear preference for which concept to teach first. For a multitude of reasons that I could defend until you all drop dead from boredom, 6- is the right concept to teach first (in my humble opinion).

But the other dynamic to understand is that of harmonic analysis itself. Here’s it’s important to understand the DIRECTION of analysis. It’s always problematic to take a real world song and force it backwards into the world of theory. Maybe that opening chord isn’t the 6- chord or the 1- chord at all! What if the composer treats it like a 6- chord in some ways, but then includes the note #4 producing the dorian sound? Does it then become a 2- chord? None of these questions have answers.

But what we CAN do is study music in the opposite direction. Learn the metaphors of the major scale. Study the seven harmonic environments, the seven chords, and then the entire path outward into Mixed Harmony. Learn to see these shapes and tonal fragments in the music all around you.

It’s no different from learning simple geometric shapes like circles, triangles and squares. You shouldn’t become paralyzed when you see a house or other object that cannot neatly be labelled as either a circle, triangle or square. But those geometric shapes still have meaning and value. Study them, understand their properties, and you’l see examples of them all around you. Maybe that house can be best understood as a triangle sitting on top of a square. And THAT is the proper analysis.

The same happens in music. And so we can certainly discuss our favorite models for understanding Summertime. But we can’t ever say that Summertime IS one particular model or another. So there’s no right or definitive answer to the question of how to think about Summertime. But the more we study harmony, the more familiar shapes and concepts we can spot when we study a tune like Summertime.

Sorry for the long answer. The TLDR is that in IFR, we first seek to master basic tonal harmony and then we journey outward into the world of abstractions. The 6- chord is a more fundamental concept so that would get studied first. But sometimes it’s out in the more abstract concepts that you find the most empowering tools. So I would always encourage you to look at every song from all angles and to feel perfectly empowered to create your own mental model for thinking about the harmony.

Great answer David, thank you. Lot’s there to think about, and encouraging as always!

To speak for myself, and perhaps for some others in the same general situation, that train left the station long ago.

I have decades of “indoctrination” in considering the tonic (home base) as the “One” (I or i), regardless of whether the tune is “major” or “minor”. Along with this, a now deep and habitual reflex to look for 2-5-1 motion (cycle of fourths) and to consider that as defining a “key of the moment”, which leads to many songs being thought of as A measures in B key, then X measures in Y key, etc.

Some tunes analyze very simply that way, and as I know you agree, it’s not “wrong”. Heck, it is very useful, in it’s way.

BUT, those techniques have not raised the curtain for me on hearing in a way that knows all the time where I am and what each possible note (or chord) would sound like in the current context. It seems to me that IFR grapples with this challenge head-on, presenting it in the simplest possible way for us to engage with. That’s what I like about it so much!

So, for me, there is definitely some “unlearning” that is part of this new-to-me method. It’s not that I’ll ever lose what I had from before, but there are reflexes that need to be made not to trigger while new perceptions are allowed to take their place, alongside at least, if not instead-of.

I am really embracing this IFR system and it is totally confusing to me to call the six chord the one chord. I would prefer my songs written out with the correct number of the chord. So if the song starts in the fifth harmonic, then the first chord of that song would be the five chord.I use an application Called songbook for my collection of songs. Is there anyone in this group using the SongBook application that could send me some examples of songs that they have converted to the Nashville numbering system and details how they converted them. That would be really helpful. I am assuming that the Nashville numbering system is basically the same concept as IFR. Let me know thanks

Why is my previous reply dated oct. 2021 (in the left margin) when I replied March 2022 same as this reply.

What is the second last chord in your first version with the 2 chord, what does the circle with the line thru it mean and which application do you use to write your songs out like that. Is it Songbook? Also, what does the title of the song mean … SJO1_. I understand after that you have the A minor or the C which is obviously the key. I was also hoping someone would clarify to me, when you talk about a 1/4/5 chord progression and you are starting from the six chord… would it be a 6/2/3 chord progression to have the same progression?

Hi. The sheets at the start of this topic were made in iRealPro. The circle with the line thru it (followed by a 7) means the half-diminished 7th chord. “SJ01” is “SJ” my initials, and “01” first version (in case more should follow).

My comment to that is that as a point of terminology, the ways in which things are talked about, people can and do say “One, Four, Five in major” and/or “One, Four, Five in minor”. Anchoring those ideas to the C major scale, those chords (as triads) would be respectively C F G or Am Dm Em.

To say “One, Four, Five in minor” is perhaps not a very “IFR-ish” thing to say, but it is pretty common general musician talk, and worth understanding what it means when you hear it, IMO.

If someone communicates to you “One, Four, Five in minor” and you want to say to yourself internally “Ah, Six, Two, Three (in the relative major)”, that’s fine if that’s what works best for you. They are equivalent.

Thank you got it