But what about a chord that is a “9” for example? Today I was putting the song Besame Mucho (Grant Green’s version) into an IFR number structure. In the sheet music that I transcribed from it has a Dm9 chord that, in this case, is a 2- chord. Is this just written as 2- or is there a way to indicate that it’s a 2-(9)? I don’t think I’ve seen this written yet anywhere.

Hi, Welcome to the Forum.
If you’d like a message to get a better chance of being picked up by @ImproviseForReal (David Reed) it’s a good idea to include an @ tag like I just did. Hopefully he’ll be along in a while now to give you the detail on your question?

I don’t know the official IFR answer, but I think chord extensions are just one more kind of “temporary deformation” of the basic musical structure, which you might use on one improv pass, but not on another. In other words a c7 with an added ninth is still a c7, to which you might add a different extension another time, according to taste. In other words, the score doesn’t have to be played exactly… which to me is the whole point of pmprov.

Thanks! I suspect that is the case when the added note is considered optional. But there must be pieces when the sound of say a C6 (Am7) chord is integral to the composition/form, and perhaps you refer to it as a C6 rather than an Am7 because you want C to be the root of the chord instead of A?

My personal belief is that if you’re improvising, then the score is a kind of rough map, almost any part of which can be changed to meet the needs of where your improvisation is going. The sound is the thing.

I did a search in the @ImproviseForReal book for “9th”.

But if you’re looking to notate it for yourself or transcribing something I found JianPu a numeric musical notation system to be really helpful. In my opinion it seems to fit hand in glove with IFR. ( a 9th would be a 2 with a dot above it to indicate the next octave up. ) 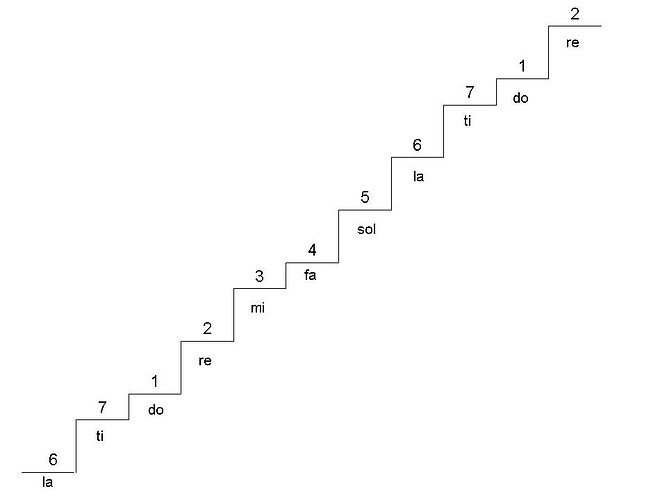 The Case for Numerical Music Notation. Part 1: Introduction and History

This article is a presentation of the concept and history of notating diatonic music with the use of numerals, of which several systems…

Welcome to the Forum

Do you mean the paragraph in the section ‘Pure Harmony Revisited’ that starts ‘This concept can be unsettling because it raises theoretical questions that seem paradoxical’?

Page references can get complicated when referring to the IFR book, so an extra clue is handy[1].

[1] Due to subtle revisions over time actual page positions can vary, especially so when it’s that far into the book, and pagination of the printed book is different to the PDF files. Plus with PDFs, the number shown at the bottom of a page is often different to the number reported by the PDF reader, because the reader often starts counting from the the cover, not from ‘page 1’ of the text.

I have an old PDF, the current PDF and a printed copy, all with different pagination (e.g. 227 is the last numbered page in my printed copy).

Thanks. I didn’t mean anything about octaves. What I understand is that a “C9” chord for example means a C chord with the addition of a D note in it. D is note 2 of the C major scale although I realize why it’s called a “9” in this case because you are extending that 1-3-5-7 chord pattern to 1-3-5-7-9. On a piano you can literally interpret that to mean a D note that is the highest note of your C chord, but I just take it to mean try and add the sound of note 2 into your 1 chord. Maybe I’m wrong but I thought there would be times when a lead sheet with an added “9” or “6” chord notated would have it there not because it’s transcribing a variation that a musician played, but because it is trying to alert me to a note that I might want to add to this chord that I otherwise wouldn’t know about.

I am familiar with Jianpu and aware that this system does have a way to notate an octave up and I have thought about possibly making use of that, but in my experience so far the only time this may be unclear in the numeric notation is when you transition from one part to another and in that case your ear can tell you. Sometimes playing the B-part to a tune lower rather than higher in relation to the A-part can be a nice variation.

When it comes to a choosing a notation style for where it’s useful that is IFR ‘friendly’, maybe the clue is in your first post?

Since 7-b5 (with the -b5 written superscript if possible?) is the notation for a ‘minor chord with flatted 5th, based on note 7’ , then if your C is the 1 chord, 1 superscript 9 would seem reasonable, even if not ‘official’?

Whatever makes sense to you and works (i.e. you can come back a year or two later & still understand it) seems like a good approach to me. If it’s readily understandable to a good proportion of other people too, even better.

Thanks @tannis.root for starting this great conversation. And thanks to everyone else who responded with ideas that are really spot on. All I can add is a reinforcement of an idea already mentioned here, which is that IFR was never intended to be a notation system. Between the traditional western music staff, modern chord symbols, solfege syllables, Chinese JianPu, Indian sargam, etc., we already have many systems that people have devised to capture their ideas.

The limitation that all of these systems will always have is an inherent dilemma which is rooted in the contradictions of our own demands. It has to do with the comment by @hender99 that “the map is not the territory”. If you want perfect documentation of the territory (e.g. the traditional western music staff which captures every single note perfectly), then you lose all of the analytical value of a map. (Classical sheet music on the traditional music staff makes no attempt to analyze groupings of notes and put chord symbols on them.) But if you want the analytical value of chord symbols, then by definition you’ve lost some of the detail of the traditional music staff.

This isn’t something that we can ever solve. It’s more like the Heisenberg Uncertainty Principle. You simply cannot simultaneously optimize for completeness AND concision.

But here’s what you can do. One option is to use different analytical tools for different purposes. For example, you can use your IFR terminology both in your personal IFR practice and also as an analytical tool for illuminating the harmonic logic of songs you want to play. But then if you create a very specific arrangement of that song that you want to perform the same way every time, you can make use of the western music staff to capture those ideas. (I freely mix tonal numbers like 3D, traditional chord symbols like Fm7, and the western music staff in my own personal notes. Some ideas are just more easily documented with one system or another, so there’s no reason to deny yourself the use of any of these tools.)

But another option would be to invent your own extension of the IFR chord symbols like @DavidW suggested. Just be aware that the IFR symbols were never intended to be a complete system of music notation. Those symbols refer only to the very specific harmony concepts that we study in IFR. But if you want to load up those symbols with more information, you could probably come up with a very satisfactory hybrid system that retains the use of tonal numbers but allows for the capture of additional detail.

If anyone is looking to take on this intellectual project, I think that there is an even more obvious way that we could improve and extend the IFR chord symbols. Specifying whether to play a chord as a triad, seventh chord, 9th chord, etc. would certainly be useful at times. But an even more glaring limitation of the IFR symbols is that they talk only about the four most basic chord notes, saying nothing about the intervening scale notes. For this reason, the symbols 2-, 3- and 6- are identical. But these three harmonic environments are certainly not identical. So what happens when you want to specify the 6th harmonic environment, but you want to build this harmonic environment at note 3? The resulting chord symbol would be “3-” but that wouldn’t tell you that you’re actually building the SIXTH harmonic environment in that place.

To give you another example in more mainstream words, what if the chord is the 6- chord but you want to specify the dorian scale (the scale of the second harmonic environment). If capturing these details is important to you, then a huge step forward would be to devise a set of IFR symbols that specify the entire 7 note scale, rather than specifying only the four chord notes.

But alas, here we find another example of our Heisenberg Uncertainty Principle. These IFR symbols which specify the entire seven-note scale actually exist already. I created them myself almost 20 years ago. But I also discarded them 20 years ago. While they could arguably be useful for a handful of IFR fanatics who actually make it to IFR Exercise 5, they would do a massive disservice to the great majority of students who are just needing to make their very first inroads into understanding music.

To put it most simply, we had to decide how much detail to include in our map. And there’s no perfect answer to this question. You can only ask the question relative to the needs of the individual you’re most passionate about helping. And where we saw the greatest need was among those sensitive music lovers who always felt that they couldn’t even find the front door to the house of music. So that’s why we worked tirelessly to strip out everything superfluous. It was all about making a big wide red carpet that would lead people to that door. But for this very reason, the IFR chord symbols were never intended as a complete notation tool for musicians as advanced as many of the commenters in this thread. So I would just encourage all of you to see this problem of documentation as another opportunity for you to express yourself, and to make your own choices about how you want to study, analyze and document music.

Yes, that’s the section I was referring to.

I’ll keep that in mind for the future😊

Pure Harmony Revisited
In the chapter “The Seven Harmonic Environments” we defined chords as being the root, 3rd, 5th and 7th of any particular scale. We called these four notes the “chord notes” and we set aside the remaining three notes of the scale as “other notes.”