Should I buy all "Sing the numbers" or "Ear training for musical creativity"?

So I bought the book a while ago and I’m invested in progressing as fast and smoothly as I can in my ear training, so I’ve decided to buy one of the video courses; the problem is that I don’t know what differentiates the ones called “sing the numbers” and “Ear training for musical creativity” as both of them seem to be very much alike.

For more context of the level that I am, I can already sing the major and minor scale without reference and I can distinguish single notes (not melodies). I’m also able to improvise with my voice singing the numbers.

So, which one should I buy?

Ear Training for Musical Creativity is a course that uses materials from ‘Sing the Numbers.’ Sing the numbers are tracks with a harmonic environment playing in the background as Mireia sings simple melodies with the numbers. If she sings a note that is the 4, she will sing ‘Four’. In each level of sing the numbers, the melodies add more numbers until you are singing with all seven. Then the melodies become more complex throughout a level, and in each level. The first level goes over the tonal map, the second goes over harmonic environments (modes), and the third through chord progressions.

In “Ear Training for Musical Creativity,” @MireiaClua is the instructor in the videos, and gives instruction in the IFR methods, including the use of the Sing the Numbers tracks. So one is a set of tracks, the other is a video course.

@Asuryan In additon to all that @woodyhaiken says, Ear Training for Musical Creativity also includes additional tracks beyond ‘Sing the Numbers’. The extra tracks are ‘Feel the Numbers’.

N.B. there is no ‘answer sheet’ with ‘Feel the Numbers’! It’s up to you to judge if you were correct. That can seem scary at first, but I’ve come to agree that it’s a good thing in the long run.

I feel that for me ‘Feel the Numbers’ has been the biggest factor in the development of my ear - though I could not have achieved that development without using ‘Sing the Numbers’ in support of it too, of course.

When I first went through the Ear Training for Musical Creativity course even the simplest ‘Feel the Numbers’ track (only notes 1 2 & 3) was a struggle for me. I’ve now been through the whole course several times. In addition to that I also use the materials at my own very slow pace outside the framework of the course doing 30 minutes or so 4 to 5 times a week (at least). I prepare playlists that concentrate on the area I’m working on. For each area I have seveal play lists so I’m not running through exactly the same sequence every time. Using the materials in this way I’m willing to spend months with each level until I feel ready to move on. Combined, those months have grown into years, a process that has led me to the point where I’m pretty confident with a range of 5 6 71 2 34 5 and am teetering on the edge of moving to the full 5 6 71 2 34 5 6 71 covered by the materials.

I may be a tough case (I was considered ‘tone deaf’ before I started this). Maybe you will progress quicker, but don’t set target times - progress at your own pace. David Reed (@ImproviseForReal ) did a video about when to move on. The longer I study, the more I appreciate the wisdom of the suggested approach. 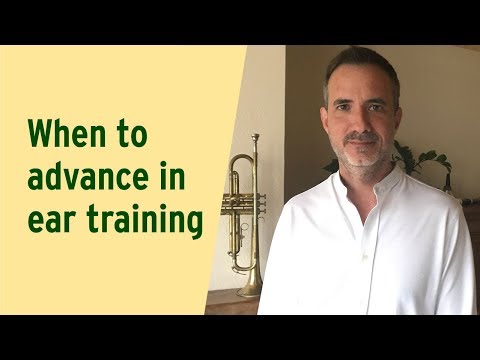 When I’m ‘doing the course’ I go all the way through ‘on schedule’ (& each time I learn more), but outside the course I’m led by trying to make an honest assessment of ‘can I do this comfortably & confidently, yet’.

I hope that helps you with your choice.

Ear Training for Musical Creativity also includes additional tracks beyond ‘Sing the Numbers’. The extra tracks are ‘Feel the Numbers’.

@DavidW I forgot about that! Thanks for rounding out the information!